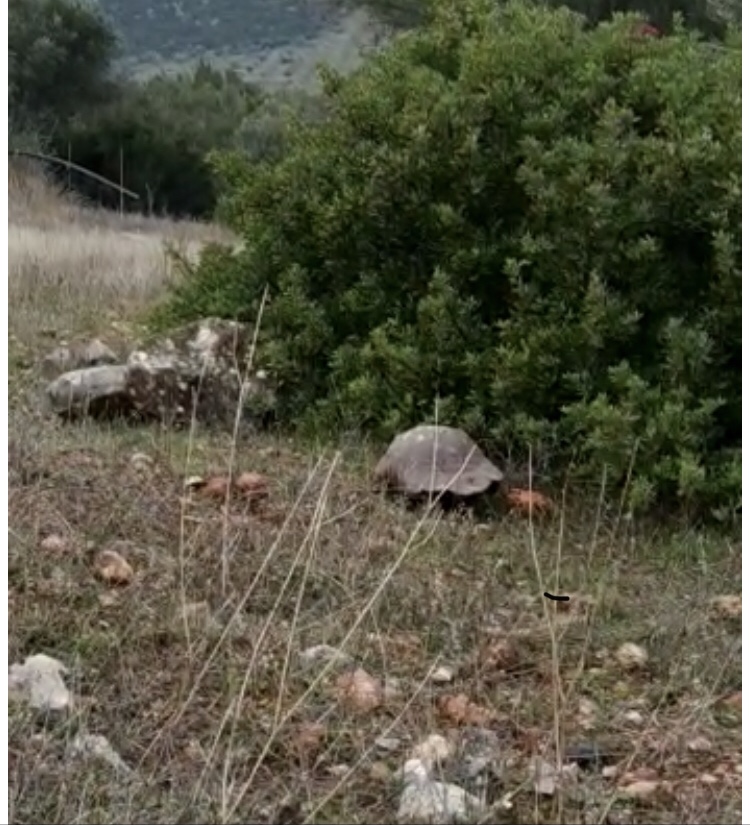 Saving tortoises protecting forests goes together for a small group of friends in Athens, Greece. When dancing together with nature in life and death situations, sometimes it is small, yet really difficult, actions that matter. With heart-wrenching disregard for bio-diversity, road graders and chainsaws are wiping out crucial habitat in a last patch of old growth forest in Athens, Greece. Syngrou Forest Estate was established by the Syggrou family as a center offering educational programs for young people in beekeeping, gardening, and farming just over a century ago. Over the years, and as the city of Athens has grown beyond all recognition, Syngrou Estate has become the city’s “lungs” and the only safe preserve for a wide range of species.

Syngrou forest, covering close to 240 acres, offers a rare green refuge in the midst of crowded Athens, and thousands of people come to walk, bike, and de-stress in this ancient place of nature. It is also home to dozens of species of animals and plants, including Greek tortoises, who are legally protected. As I write this, all growth 3 meters and less (just under 10 feet high) is being cut in Syngrou Estate, eliminating habitat for countless species. This devastation is slated for completion in less than a week.

In response to this massive destruction, teacher Angie Athanasiadi, a native of Athens, has been working frantically with a few willing friends since August to save the lives of as many tortoises as possible. As her sister Marina writes, Syngrou forest has “pine trees, cistus, wildflowers, tortoises and foxes and all forest beings great and small.” Tortoises are revered in Greece and can live more than a century. Unfortunately, it has been the custom in Athens when finding a displaced tortoise, to bring it to Syngrou forest for its safe survival. Now the tortoises, hedgehogs, foxes, and medicinal plants are all under assault from the heavy machinery clearing the underbrush. In the last two weeks, much, much worse than displacement is happening. Plants and animals are being wiped out.

It is acknowledged wisdom that “ladder fuel”, smaller trees in a forest, especially dead growth, can increase the risk of fire. Yet how ladder fuel is cleared is the main issue of contention in this last remaining old-growth forest in Athens. Clearing can be done with skill, respect, and attention to habitat preservation and biodiversity. This is not what is happening in Syngrou forest.

When the road graders and chainsaws first appeared in the forest late this summer, the Athanasiadi sisters contacted every governmental agency they could think of, from the federal level to the municipal level to journalists and the  local police. Tortoises are a strictly protected species in Greece under the Bern Convention, the European Community Directive 92/43/EEC of 21 May 1992, and by Presidential decree number 67, ΦΕΚ. (personal communication, M. Athanasiadi, 12/3/22) Yet only one governmental figure, the former Minister of the Interior and a current Member of Parliament, Panos Skourletis, has stood up for biodiversity. He has presented a formal inquiry to the Greek Parliament to stop the devastation. Yet the carnage goes on.

This governmental action may come from a strangely dedicated attitude, “Let it not be said we don’t care.” Wildfires in Greece since 2018 have taken human as well as animal and plant life. When bureaucrats have been confronted about the loss of speciation in Syngrou forest, the response has been that this is being done to save human lives. This humano-centric attitude has lead to the Forestry department’s support for the current drastic clearing, while taking no action to do any kind of environmental impact assessment or move to protect species in the Syngrou habitat that is being destroyed.

Saving tortoises protecting forests one life at a time

In desperation, the Athanasiadis and their companions have begun saving as many tortoises as possible and taking them to safe havens before they are crushed and torn up by the machines. (Angie posted the grim results of the drastic clearing on her Facebook account, in tortoise parts.) As of this week, twenty tortoises have been moved to a safer area, a place where the largest tortoise their family has ever seen was once spotted. It is friendly habitat. The tiniest rescue tortoise is smaller than a thumb’s length (see below). The tortoises are beginning to make themselves at home in their new environment.

Ironically in Athens, as here in New Mexico, it has been the government with the support of the Forestry department that has tenaciously unleashed the destruction, in the name of protecting humans. Here in New Mexico, the largest wildfire in history was unleashed this past year after not one, but two, fires set by the Forest Service raged out of control. Vast swathes of green forest, animals, plants, and whole villages have been reduced to silver ash.

Local communities have struggled to hold the federal government and the Forest Service accountable. In a powerful show of support for citizens and biodiversity, the Santa Fe County Commissioners voted unanimously in July 2022 for Environmental Impact Statements as a prerequisite for any future work in Northern New Mexico forests. Last month the Santa Fe County Commissioners called a rare public meeting on Zoom about this. 1,500 community members came to testify online. They let the attending Forest Service representative known exactly the depth of the devastating impacts and their support for the Santa Fe County resolution that was passed this summer. Yet reportedly the Forest Service has not agreed to this essential measure, in an appalling show of hubris.

In Greece, as almost everywhere, it’s more than one species that is at risk

As Greek tortoises are being rescued, many land-bound species are not. When such wholesale devastation occurs, it is hard to know the long-term repercussions. The lovely Cistus incanus, rock rose, is one vital member of the Syngrou ecosystem. Marina Athanasiadi, a respected herbalist, points out that this plant is just now being researched for its anti-viral properties.  This is a time to preserve species, not destroy them.

Emergent Strategy and the bigger picture

In reflecting on saving tortoises protecting forests, I’m drawn to the work of Afro American author adrienne marie brown. An activist with a strong bent for learning from nature, her book Emergent Strategy: Shaping Change, Changing Worlds has brightened my perspectives in tough times. Her interview with sister activist Autumn Meghan Brown, speaks to me in this moment: “I think living with access to a big natural environment has completely shifted my approach to facilitation. Because I live in the woods and get this front-row seat to the dance of life and death and the big cycles and the way in which a lack of protection and relationship exposes us to danger. It also means I am more likely to go to breath. It means I am more likely to go slow and let things take up space where I used to rush. Living in the woods is teaching me to notice more. Because I can see how everything’s survival is related to how it’s tuned into the space it occupies, its ability to notice, to be noticed.” Or as Marina told me this month from Greece, “We have to wait for the tortoises to come to us…” to be able to rescue them.

Where to go with saving tortoises protecting forests now

I had hoped to invite you as a reader to weigh in on this massive loss of habitat and species. As this blog goes up, there are new developments. Angie Athanasiadi has just been informed that the forest clearance has been extended until February 2023 because the government cannot clear everything they want by the initial deadline of this week. This gives the rescuers more time, but also makes things worse in that heavy machinery will continue to impact the forest for at least another two months. Also, as the weather gets colder, the tortoises slow down, hide, and hibernate. This makes it more difficult to find them to rescue. Yet, more time could mean more people lend support.

At this time there is no single email gathering complaints, no formal organization to support. Instead, I invite you to hold this habitat and all its beings in your kindness eye. If you are on Facebook, Panos Skourletis’s page includes information about the Syngrou forest. May his legal action be successful before more life is lost. May the tortoises and their rescuers receive all the support they need. May whatever healthy connections need to be made, happen.

Images much thanks to Angie & Marina Athanasiadi

For more information about sustainable healing, I invite you to explore more on this website.