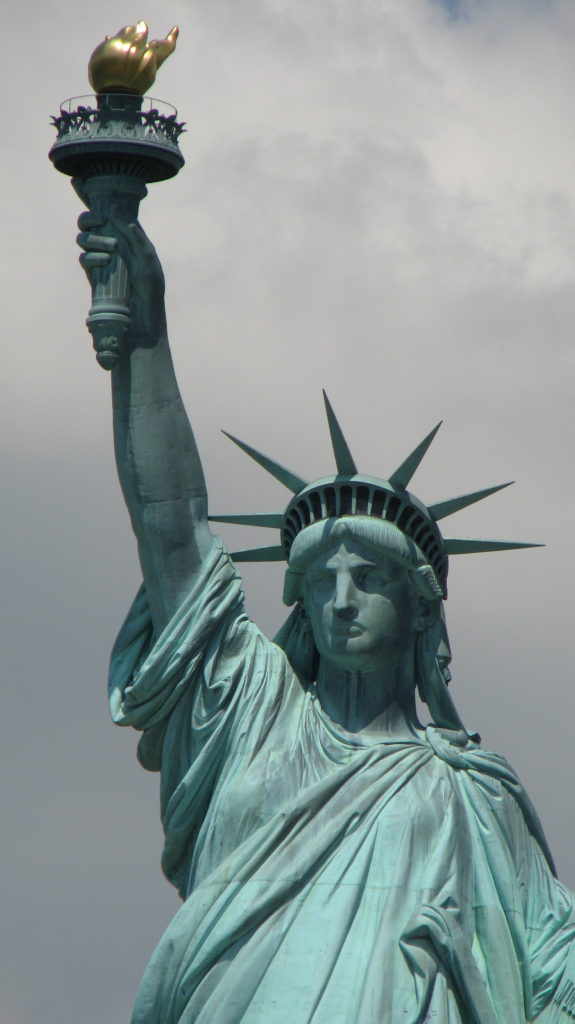 The new year was only a few weeks old when I walked into a fresh local Mexican restaurant for a quick enchilada before I got back to work. Late in the lunch hour, the first person I laid eyes on as I walked in the door kind of astounded me. It was Lady Liberty! How could this be? As I looked closer, I realized it was actually a man in his fifties. He was wearing a broad Lady Liberty crown with green spikes extending out in every direction from the top of his head with a loose gown made of matching emerald green cotton cloth, worn over street clothes. On the diagonal sash across his chest, read the words LIBERTY. . .. His job was to attract attention to a business by that name by standing on the street. Yet right now he was on break eating lunch. I put in my order and sat down a ways away. There was another woman customer, new to the café, who’d come in the same time as me. Somehow the three of us got into a conversation, before she departed out the door with her to-go order. The Lady and I kept talking.

He was a Santa Fe native, he said, yet he’d been homeless since his mother died some years ago. He was obviously honest and not an alcoholic, as he revealed. Yet fortune had been hard on him, and he had multiple medical issues. If it wasn’t for the kindness of local merchants, trading him food and warm clothes in exchange for his help, he would be in much worse shape, he said. He slept in a gully between the public library and the high school. I kept looking at his face, overshadowed by his giant crown.

A few nights after this meeting, the Republican Congress met in the middle of the night to begin to finish off health care for the poor.  These same men are able to receive excellent health coverage, yet they were willing to cruelly deny it to someone like the man I had just met. They get health insurance, why not him? He was a decent man, doing his job. That Lady Liberty was homeless in her own hometown, seemed too true for words.

The Dalia Lama reportedly said recently that while it is the Buddhas that shower us with wisdom, it is human beings we need, to help us develop compassion.

There is a single ground. We all add our ingredients to the cosmic soup. What essence, what flavors will you offer? To hold as much compassion for one of these congressmen as the man dressed as Lady Liberty is hard for me to do. Yet I know that working together as citizens, including with Congress, is part of what I have to do. Part of my contribution to the soup is as a citizen.

I began this blog late yesterday, and since then much has changed. Discrimination on the basis of religion is unconstitutional. Yet refugees are being detained in US airports on this basis, and based on the country of their origin. The ACLU has won its first case against Trump’s new executive order. For more information on how to support their efforts, click here.

Last weekend we began by marching, lots and lots of us, all over the planet to affirm positive values of respect and equality for all. We stuck up for Lady Liberty. We must continue to do so.  We need to keep showing up in effective ways. Yet it will take courage and persistence.

Speaking of contributions to the soup, I’d better get down to my job as an Ayurveda blog writer. This blog has received notice for its excellent coverage of Ayurveda. We are honored to be one of the top 30 Ayurveda blogs on the web. We send thanks and appreciation to Anuj Agarwal and his team. Check out all the great sites!

I’ve been advised that since photographer Renee Lynn and I are coming out with a brand new eBook with fresh delicious Ayurveda recipes soon, I should let readers know this. “Please put out a recipe or some such thing to get people’s attention” was the request. Gladly, I respond.

So this one got five stars from my friend Nancy yesterday, she of The Nourishment of the Deep blog fame. We were meeting for lunch, and it was my job to provide the soup. We both like beets. I figured I would make the yummy beet dish soon to come out in the new eBook, yet then I realized that we both needed something different for this particular day, a little more cleansing, a little less building. So here’s what I did:

Bring the water to a boil in a medium stainless steel pot. Chop the beets into one inch pieces, or however you like, and put them in the water to simmer on medium heat until tender. Add the tangerine juice and unsalted vegetable bouillon to the pot and cover. The beets will take 15 – 20 minutes.

In the meanwhile, in a skillet, warm the coconut oil and put in the ginger, onion, and cloves. Stir occasionally over medium heat until the onions are transparent and everything smells delicious, about five minutes. When the beets are tender, spoon the onions and spices with them into the pot and stir. Pull out an immersion blender and blend the soup coarsely, so that it’s part chunky and part smooth. Or, if you want to use a regular blender, that’s just fine too. Serve with love.

What I mean here by “mildly increases Pitta” is that in winter, this could be eaten by someone of Pitta constitution once every week or two. If one had an acute inflammatory Pitta disorder or it was a hot summer day, it would not be eaten by Pitta. It is excellent for Vata and Kapha in winter and all seasons.

If we look at this dish from an Ayurveda herbal formulation perspective, the leader is clearly the beets. With a sweet rasa, cooling virya, pungent vipak, these heavy characters are a great tonic for the blood. The somewhat heretical assistant is the tangerine juice, it works with the beets and coconut oil to calm Vata and enhance iron absorption from the digestive tract into the blood. While fruits are rarely combined with any other food in Ayurveda, they occasionally can be in cooked combinations. Both the cloves and ginger are digestive. Cleansing cloves clear excess Kapha from the reproductive tissues, and onion with pungent clove can be used to cleanse blood fats (usually onion juice with trikatu would be the classic way to do this).  Ginger is rejuvenative. Organic coconut oil strengthens immunity, builds ojas, and provides a cooling moderating influence for some of the other warming team players.

Transitting from food to movement, I’ve recently picked up Ruthy Alon’s Mindful Spontaneity again, a delightful take on mind-body interactions from the Feldenkrais perspective. She highlights the way tightened muscles can play off a tightened mind. Whether you key into a more relaxed open stance with Feldenkrais, yoga, a quet walk in a place that rstores you, or shooting some basket ball, it’s all part of the soup.

Circling back to where we began, the February 2017 issue of The Sun has a strong article from Krista Bremer, looking at her life as an American within a Muslim family.  At one point she writes, “Immigrants, refugees, undocumented workers, African Americans, and others more experienced with oppression could run workshops to teach white, middle-class liberals like myself how to adjust to life under Trump.” Uh huh. If I look at it that way, part of what Lady Liberty was teaching me over lunch, by example,  was to be present and practical, matter of fact.

May everyone get the food. respect and legal rights we need.