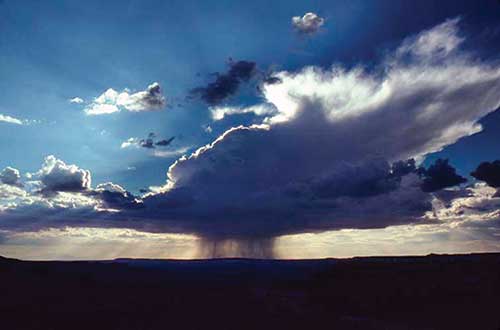 The Hopi people of the indigenous southwestern United States have orally passed down prophecies about the planet and its people through their elders with great care for generations. Some of these prophecies have also been recorded in visual form. This is the case with Prophecy Rock, a pictograph found in an outcropping of stones near Oraibi, Arizona. Prophecy Rock depicts a single path that splits into two paths with two fruitions. The path that persists close to the ground is a nature-based path of life, living in harmony with the greater community of all planet earth. The upper path becomes a jagged zigzag line that ends in midair, while the nature –based path continues on as far as the rock extends.

I find myself thinking about this prophecy a lot these days. When I was younger, in the 1980s and 90s, I was lucky enough to know Grandfathers David Monongye and Thomas Banyacya, holders of the Hopi prophecies. When I met them, they were no longer keeping the prophecies secret, but rather speaking publically about them to as many people as would listen, indigenous and not. (Grandfather Martin Gashweseoma, of the next generation, has also acted on the urgency of the prophecies’ content. He can be seen speaking near Prophecy Rock on YouTube.) Grandfathers David and Thomas talked about the earth growing cold if “people stole energy from the Sun”. They talked about a people that would come in small numbers from the East to the West. If these people were listened to, things could go well. If they were not, many more people in the form of armies would come from the East. (There is a famous photo of the Dalai Lama meeting with Hopi elders in 1972, including Grandfathers David and Thomas. Because of the prophecies, Hopi elders have been open to visits from dignitaries from the East, like the Dalai Lama and the Karmapa. At that time, Tibetans and Hopis made it a strong point to meet.

Both Grandfather Thomas and Grandfather David talked about Prophecy Rock, how white people would become so entranced with various technologies that we/they would lose all touch with natural reality, and this would threaten the existence of life on earth. The pictograph begins with a large one-hearted person, often described as Great Spirit. A single path arises from this figure at a diagonal, and then splits into two paths that run parallel yet separate from one another. There are two points where the two roads are connected by a short line or bridge between them. The first relates to the coming of white people to this continent; the second bridge represents what the Hopis say is the last opportunity for humans to return to the Path of Life that respects all nature. If this return is not chosen, those on the upper path of technology face a zigzag road that disintegrates and vanishes. On the upper road are three “two-hearted” people, not one with themselves, and a final one-hearted person, close to the bridge of return. The Hopis say that those who honor the ancient Path of Life, especially the Hopi people, will survive whatever times of purification come.

This image comes to me often on the days I spend working with my computer, like today, and those when I don’t, away from wi fi working in the woods. There is an increasingly large body of evidence that suggests that electromagnetic technology, in the form of wi fi, smart phones, cell phones, smart meters, TVs and others, present biohazards to our health. The World Health Organization in June of 2011 said radiation levels emitted from common cell phones were “possibly carcinogenic”. http://techland.time.com/2011/06/01/smartphone-radiation-the-10-highest-and-10-lowest-emitters/4/ In fact, they were named Class 2 B Carcinogens at that time. Surprisingly little media attention focuses on the research that suggests exposure should be limited, especially among very young people with developing brains. Katie Singer, in her new book An Electronic Silent Spring explores how electromagnetic radiation can impair normal biological function. Her website is quite informative, including simple ways to minimize one’s exposure, as in turning off the modem at night. http://www.electronicsilentspring.com/8-easy-emf-solutions-start-today/

Yet the enthusiasm for wi fi has multiplied very rapidly. In 2014, 71% of US households with kids aged 4 – 14 reported owning a smart phone, up from 55% just two years earlier. In this same 2014 study, 35% of children in US households used smart phones, up from 21% in 2012. What would it be this year? Russia, China, italy, and Switzerland historically have been more cautious about radio frequency exposure, especially for children. Scientific literature lists concerns about sleep problems, decline in attention and memory, increased irritability, and increased sensitivity to stress as potential repercussions of cell phone use in children. http://apps.fcc.gov/ecfs/document/view?id=7520942013 I have noticed the same kind of problems in adults using Smart phones. Over the last few years, I’m fielding more reports of insomnia from people I wouldn’t expect it in, even those with a strong grounded Kapha constitution. This concerns me.

I am communicating this information to you electronically. Without the “zigzag path”, you would not be receiving this message. Yet at what cost? In May of this year, the Berkeley, California city council voted unanimously, based on the scientific data, to pass a Cell Phone Radiation Right-To-Know Ordinance. Wireless retailers must warn customers about the possible radiation exposure generated by cell phones when they are purchasing them. Clear warnings state that the potential risks are greater for children. https://www.rfsafe.com/cellphone-radiation-right-to-know-ordinance-unanimously-passes-in-berkeley-ca/ Yet our innocence and trust in cell phones and smart phones remind me of an earlier era, when my parents could take an X ray of their own feet with a machine posted outside of shoe stores, no problem.

Most of my clients, like myself, are not independently wealthy. It is very difficult to be able to work in this modern world if one refuses to use this technology. More and more I find myself recommending breaks from wi fi, a “wi fi fast” of a day per week, if people are willing, to help reset their inner balance, reduce their exposure, and rebuild ojas. (Much of the research indicates changes in antibody levels, related to immunity. http://apps.fcc.gov/ecfs/document/view?id=7520942013) Even the FCC, the Federal Communication Commission in charge of regulating cell and smart phones, recommends keeping them at least 5 – 25 millimeters away from the body (this amounts to a whooping inch or less). Yet for many a young person just setting out on a professional path, it’s easy to have the device glued close to your ear. Being “on” 24/7 has become the standard. Yet it’s a very recent standard of practice. There is a reason why so many cultures have woven a day of rest into their dance. While we may be afraid to miss out on an ounce of needed business or a moment of social connection, the non-stop plug – in habit may ultimately impact our ability to work, in the form of depleted ojas, anxiety, depression, obsession, and loss of perspective.

I log on to Safari for more information. My husband Gord and I joked last night about an app for Smart phones that would let you know just how much your current exposure is. It turns out a company named Tawkon created just this! However it was not well received by I Phone executives, so at this point it’s not available. On the web, I read a 2011 Time magazine article by Doug Aamoth that explains the biological exposure issue. Smart phones emit radio frequencies. How much your body absorbs from your phone is measured by its SAR, the Specific Absorption Rate, in watts per kilogram of your body weight. In the US, India, and China, phones need to have an SAR less than 1.6 watts/kg. Different tech companies have paid more attention to biological safety than others. Samsung in particular has made it a strong priority to create safer, lower radio frequency phones. http://techland.time.com/2011/06/01/smartphone-radiation-the-10-highest-and-10-lowest-emitters/4/ The I Phone, especially the new larger I Phone 6 Plus, is not on the lower end of emissions. It is reported to be close to the US considered safe limits, and poses six times more radiation exposure than some Samsung models. https://www.rfsafe.com/samsung-cell-phones-rated-lowest-radiation-cell-phones

Right now, I find myself metaphorically and literally shunting back and forth across that last bridge in the picture on Prophecy Rock. When I’m lucky enough to be out in the woods, I haul my water, saw my wood, plant when the season invites it, no computer in sight. There’s nothing to run it on. Yet each week I cross the Prophecy Rock bridge again, coming back into 21st century technology. I answer the emails, write the book I’m working on, keep up with work responsibilities on the web. (I notice that no one ever says how well I look after 8 hours on the web – only when I’m coming back from the woods, freshly wi fi free!)

I ask myself and you, what step by step changes are possible? If we want it, how can we wisely and safely transition to the Path of Life?